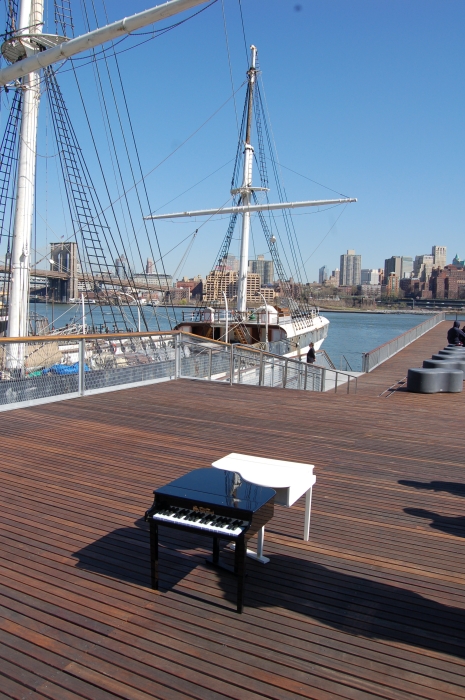 The 64 Schoenhut baby grand toy pianos evoke a sense of whimsy as visitors wander through The 'zen-like' Pier 15 to the dainty, chimelike tones of the music, allowing them to experience the new Pier 15 in an enchanting way. Toy pianos will also be placed on Pier 16 too, entertaining visitors as they wait to board water taxis and herald the existence of the event to unwitting tourists.

"Kun" musically represents the 64 hexagrams of the I Ching, the ancient Chinese book of divination that was also used by the avant-garde composer John Cage. "Kun" will feature 64 musicians performing on 32 white Schoenhut baby grand toy pianos and 32 black Schoenhut baby grand toy pianos which are placed in 11 pairs (representing the yin/yang formation), 1 quartet and 38 solos creating 50 toy piano 'stations' throughout Pier 15&16. Each station will perform a six-minute duet, for a total of 50 linked and unique compositions. Each toy piano will represent one of the 64 hexagrams of the I Ching and, as such, have a unique 6 note scale.

"Kun" will be performed by professional musicians in the NYC area organized by Make Music NY, which presents free concerts every year on the summer solstice, June 21st. The concert will end at sunset with a tribute to the John Cage in honor of his centennial. Toy piano 'stations' will perform his "Suite for Toy Piano"(1948), the very first composition for the instrument.

Invented in Philadelphia in 1872 by German immigrant Albert Schoenhut, the toy piano was originally designed as a musical instrument for children. In the twentieth century, it began to be used in more serious musical contexts, the first of which is "Suite for Toy Piano" (1948) by John Cage. Wendy Mae Chambers-who collaborated with John Cage on an event for 30 harps-has been called the "possibly the world's foremost virtuoso of the toy piano" by the New York Times. The 64 toy pianos, from Schoenhut Toy Pianos (model 379) each have 37 keys (3 octaves) and are the 'Steinway of the toy piano'. Ms. Chambers was the first person to play an entire recital on toy piano at the Knitting Factory, NYC in June of 1990.

In addition to her work with the toy piano, Ms. Chambers is also well known for her large-scale musical events at venues including New York's Central Park Lake, Lincoln Center, the Museum of Modern Art, the Kennedy Center, and the Cathedral of St. John the Divine. Her composition Twelve Squared, a "voodoo tone-poem" for 12 percussionists written in memory of John Cage, was described by New York Times reviewer Alex Ross as "fuller and more vigorous than anything in Cage's output". She has specialized in epic works for multiples of the same instrument including 77 trombones, 30 harps, 10 grand pianos, 26 marimbas and 100 timpani. She has composed 2 large percussion ensemble pieces for Robert Falvo (Appalachian State Univ. Percussion Ensemble), each for 16 players, inspired by the heavens; "Night of the Shooting Stars" (a tone poem about the 2001 Leonid Meteor Showers) and "Orbit" (based on Kepler's Laws of Planetary motion). Her most recent composition is "For the Birds" (2011) a catalog of bird calls for toy piano solo and clay warbler water whistles commissioned and premiered by Phyllis Chen. 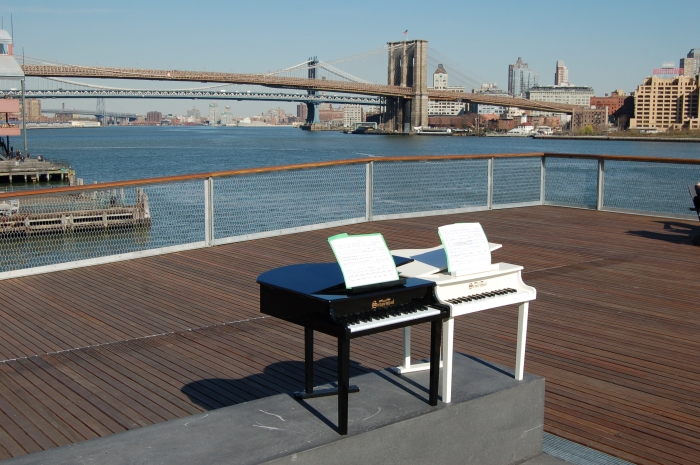