The 64 toy pianos evoke a sense of whimsy as visitors wander through Vizcaya's picturesque gardens to the dainty, chimelike tones of the music, allowing them to experience Vizcaya in an enchanting way. The event will be open to all visitors with paid museum admission of ($10 Miami- Dade residents/$15 otherwise) and marks the Miami debut for noted avant-garde composer and renowned toy pianist Wendy Mae Chambers.

"Kun" musically represents the 64 hexagrams of the I Ching, the ancient Chinese book of divination that was also used by the avant-garde composer John Cage. "Kun" will feature 64 musicians performing on 32 white toy pianos and 32 black toy pianos placed in pairs throughout the gardens, representing the yin/yang formation. Each pair will perform a six-minute duet, for a total of 32 linked compositions. Each toy piano will represent one of the 64 hexagrams of the I Ching and, as such, have a unique 6 note scale.

"Kun" will be performed by professional musicians in the South Florida community as well as by local high school, college, and university students from Florida International University, the University of Miami's Frost School of Music, Barry University, Lynn University, and New World School of the Arts.

Invented in Philadelphia in 1872 by German immigrant Albert Schoenhut, the toy piano was originally designed as a musical instrument for children. In the twentieth century, it began to be used in more serious musical contexts, the first of which is "Suite for Toy Piano" (1948) by John Cage. Wendy Mae Chambers-who collaborated with John Cage on an event for 30 harps-has been called the world's foremost virtuoso of the toy piano by the New York Times. The 64 toy pianos, generously on loan from Schoenhut Toy Pianos, each have 37 keys (3 octaves).

In addition to her work with the toy piano, Ms. Chambers is also well known for her large-scale musical events at venues including New York's Central Park Lake, Lincoln Center, the Museum of Modern Art, the Kennedy Center, and the Cathedral of St. John the Divine. Her composition Twelve Squared, a "voodoo tone-poem" for 12 percussionists written in memory of John Cage, was described by New York Times reviewer Alex Ross as "fuller and more vigorous than anything in Cage's output". She has specialized in epic works for multiples of the same instrument including 77 trombones, 30 harps, 10 grand pianos, 26 marimbas and 100 timpani. 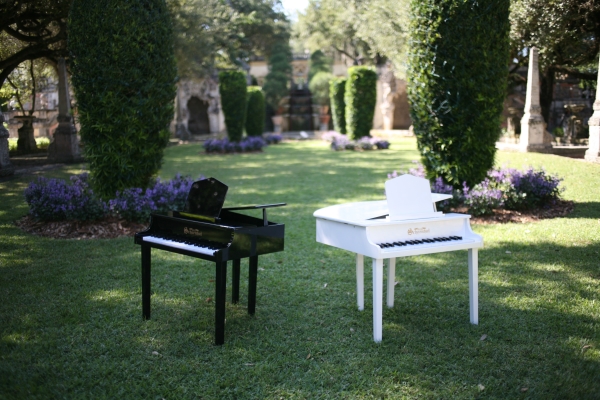